This year we are pleased to be able to present our Showcase of Learning Assemblies. Our first assembly will be presented by Year Five and Six on the last day of term, Thursday 1 April.

Due to COVID restrictions, and to comply with the 2m2 per person rule in our Hall, the assembly will be presented twice, once for the students and the second time for the parents and carers of Stage Three students.

The parents and carers assembly will be held at 12.30pm. Please enter the Hall through the hall front doors, sign in and sanitise before taking your seat. Please also remember to social distance from others that are not part of your household.

Only 3 days to go until the Crookwell Community Fun Run organised by our P&F Association. I would like to encourage all of our families and friends, young and not so young, to come out on the 28 March to walk, jog or run in support of this fundraising event.

Prizes will be award to placegetters in various age groups and a barbecue lunch will be available.

Tickets can be purchased by going to https://www.eventbrite.com.au/e/crookwell-community-fun-run-tickets-142454985697

I would like to thank the families who have offered to do a job on the day or given a donation to the P&F to offset the organisation costs.

Thank you also to the businesses who have sponsored this event. 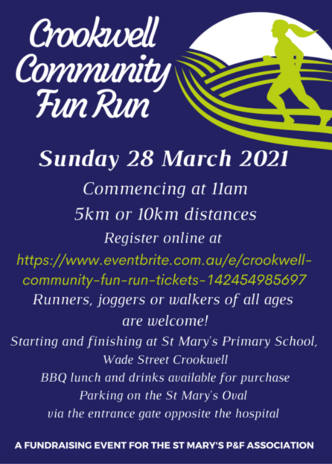 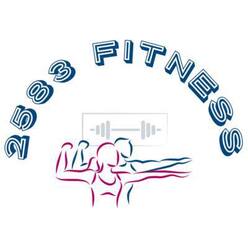 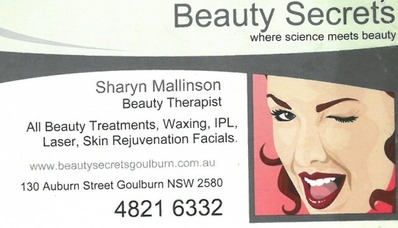 This Sunday is Palm Sunday and marks the beginning of Holy Week. Holy means "set apart." Christians set apart an entire week (Palm Sunday, Holy Thursday, Good Friday, and Holy Saturday) to recall the greatest tragedy and sorrow and the most important time in our history – the suffering and death of Jesus for humanity’s sake.

On Palm Sunday, Christians celebrate Jesus’ joyful entrance into the holy city of Jerusalem where he was welcomed by crowds worshipping him and laying down palm leaves before him. Jesus, along with thousands of Jewish people, were making the annual pilgrimage to the holy city to worship at THE holy temple and celebrate the Feast of the Passover (when they remembered God leading their ancestors out of slavery in Egypt hundreds of years before). Pilgrims had to be in the city no later than seven days before the beginning of the Passover Feast to worship at the temple and purify themselves.

But this joyous return to Jerusalem is only one side of the story of Holy Week.

By now many were filled with hate for Jesus, especially after he offered proof of His Divinity during a previous visit to Jerusalem where he announced…

Many people did not believe Jesus. They called Him a blasphemer and wanted to see him dead. 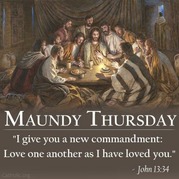 After His triumphant entry into Jerusalem on ‘Palm Sunday’, Jesus retreated from the public to celebrate the Passover Feast with his apostles and tell them about His impending death. This was to be Jesus’ Last Supper with His apostles…

‘Then he took a loaf of bread, and when he had given thanks, he broke it and gave it to them, saying, “This is my body, which is given for you” (on the cross) “Do this in remembrance of me.” And he did the same with the cup saying, “This cup that is poured out for you is the new covenant in my blood.”’ (His blood poured out in death) (Luke 22:19,20).

Catholics go to mass each week to remember Jesus’ last supper and his sacrifice. 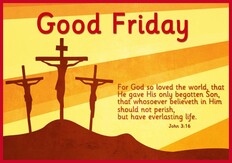 After Jesus’ Last Supper’, whilst praying in the garden, He was arrested and put on trial by the Jewish leaders, who did not believe he was the Messiah (God’s only son sent to save humanity).

Jesus was soon condemned to die by crucifixion. He was tortured and made to carry his cross to Golgotha - a little knoll rounded like a bare skull located outside the gates of Jerusalem (Golgotha means ‘skull’). There Jesus was crucified…

‘Then Jesus, crying with a loud voice, said, “Father, into your hands I commend my spirit.” Having said this, he breathed his last. When the centurion saw what had taken place, he praised God and said, “Certainly this man was innocent.”’ (Luke: 23:46,47)

I asked Jesus… “How much do you love me Lord?”

He stretched out his arms and said… “This much.” And then he died.

Jesus died and was buried that same day. He arose three days later, on Easter Sunday…'So it is written that the Christ would suffer and on the third day rise from the dead' (Luke 24:46).

Christians believe that the events of Holy week were all a part of God’s plan to save humanity. Jesus lived, suffered, died and rose again to forgive our sins and show us the way to eternal life. God so loved us, that He sent His only begotten Son to die for us and bring us closer to him. Let us reflect next week on the significance of Jesus’ last days on earth.Bottom of Form

St Mary’s School will be holding a whole school prayer reflection on the events of Holy Week next Thursday in the Church at 9:30am. All are welcome to join us.

Due to the closure by the ULSC of all sporting grounds this week, details for our new date are as follows

Times:  The carnival will commence at 9:15am and conclude at 2:45pm

Canteen:   There will be NO CANTEEN facilities available. Students are to pack their own recess, lunch and plenty of water.

URGENT- We need your help….

At this stage our volunteer numbers are low, meaning that we do not have enough timekeepers or team managers. The role of the manager is to ensure their group is at the correct activity and to record lengths or times.

If you are able to assist with either of these, please email Belinda in the office by Friday, March 26.

Students in Years 3-6, who expressed an interest took notes home for Rugby Union Gala Day last week. Consent and medical forms are due back to school as soon as possible, please. This will determine if we have sufficient numbers to enter teams for the event.

The month of March is a busy one for Representative Sport Trials.

ANY STUDENTS WISHING TO TRIAL FOR ANY SPORTS IN 2021 ARE STRONGLY ENCOURAGED TO REGISTER AS EARLY AS POSSIBLE.

Congratulations to Sophia Galland and Ava Nicholson who were successful at the Canberra/Goulburn Cricket Trials and now move to the MacKillop Trials. Well done girls!

Registrations received to date include:

Best wishes for Saxon trialling for Rugby League on Monday.

HOCKEY - 29 March- PHYSICAL TRIALS ARE NO LONGER REQUIRED ON MONDAY. ALL THOSE WHO NOMINATED FOR HOCKEY SHOULD HAVE RECEIVED AN EMAIL WITH A LINK TO PROGRESS TO THE NEXT LEVEL. PLEASE ENSURE YOU ACTION THIS EMAIL (CHECK YOUR JUNK MAIL IF NOT RECEIVED)

Please head to the Canberra Goulburn Sport Webpage for information regarding the trials and the link for registration.

As the Staff member fulfilling the role of Child Safe Advocate, this year one of my priorities will be Online Safety. Our children are tech savvy and many of them spend a lot of time on various sites that we deem 'safe'

Please take the time regularly to check 'where' they are and what exactly they are accessing. The poster below will outline ways you can ensure your child's online safety 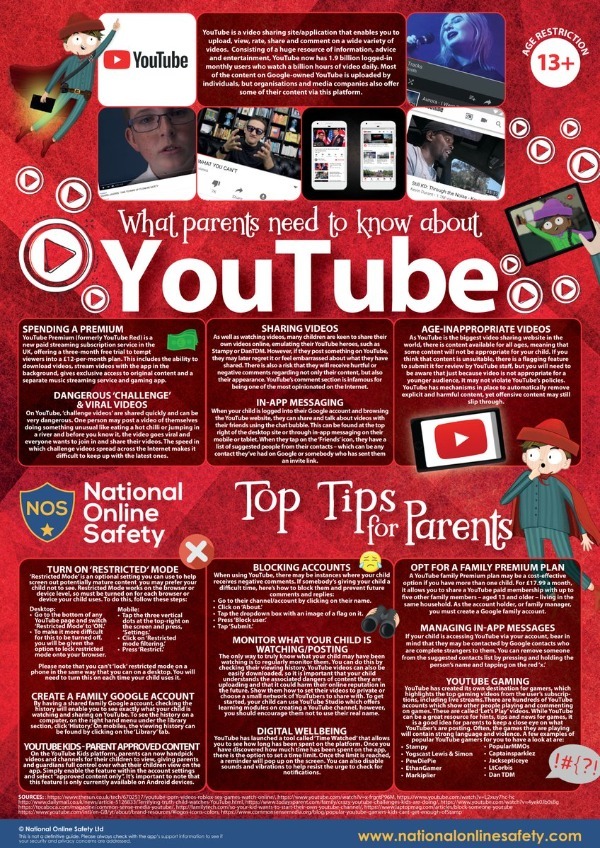 Ask student: how are you going to remember this information?

Model strategies they might use, relate it to their own experiences

To make some musical percussion instruments, please send in your washed drink bottles (preferably without labels) to allow us to make them in class.

We have been offered the opportunity to run a fundraising barbeque at a clearing sale to be held on Sunday 2 May. This is a great opportunity for the P&F to raise some funds. If you are able to assist with this sale can you please contact me on 0429 902 375.

Thanks for your support of our events.

Thank you to the people who have sent back their helper form for the Crookwell Community Fun Run, and who have either entered the event and/or offered donations.

We are also very appreciative of those who have offered business sponsorships. If you haven't already done so, these can be paid for via the Eventbrite page https://www.eventbrite.com.au/e/crookwell-community-fun-run-tickets-142454985697  Please email your business logo and advertisement to the School Office and this will be included in the event publicity.

Please help us spread the word about this event - only 3 days to go!

We would like to invite any new or existing families to join us for a shift volunteering in our school tuckshop this year.

If you are able to assist please fill out the eform here: Tuckshop Helpers

PLEASE NOTE THERE ARE STILL NO CASH SALES AVAILABLE.

If you have dates you can or cannot do during Term 2, please contact Rechell Naughton so she can complete the roster. 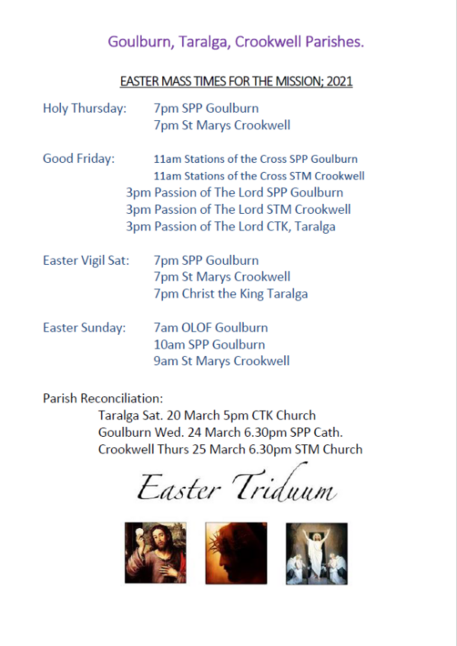 For Parish and Sacramental matters please forward your enquiries to Pastoral Associate Sr Rosemary via email or call into the Parish Office at the Old Convent Building on Tuesdays or Thursdays. 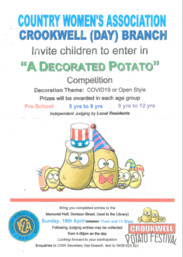 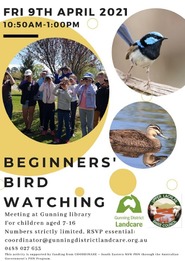 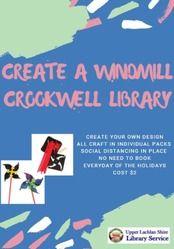 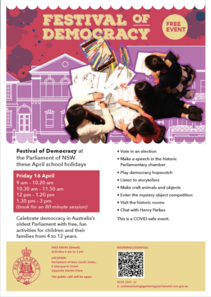 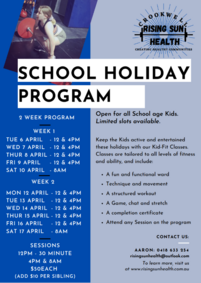 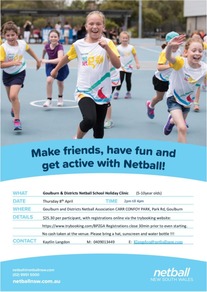