Due to our continued use of Google Classroom for some learning tasks, particularly in the upper primary, it recently became evident that we required some more student Chromebooks. Late last week, Year 6 were thrilled to unpack twenty new HP Chromebooks, 11.6" HD Touch. These terrific little devices came with a Google Education licence, a touch screen and tough cover and are the perfect new addition to our Year 6 connected classroom. 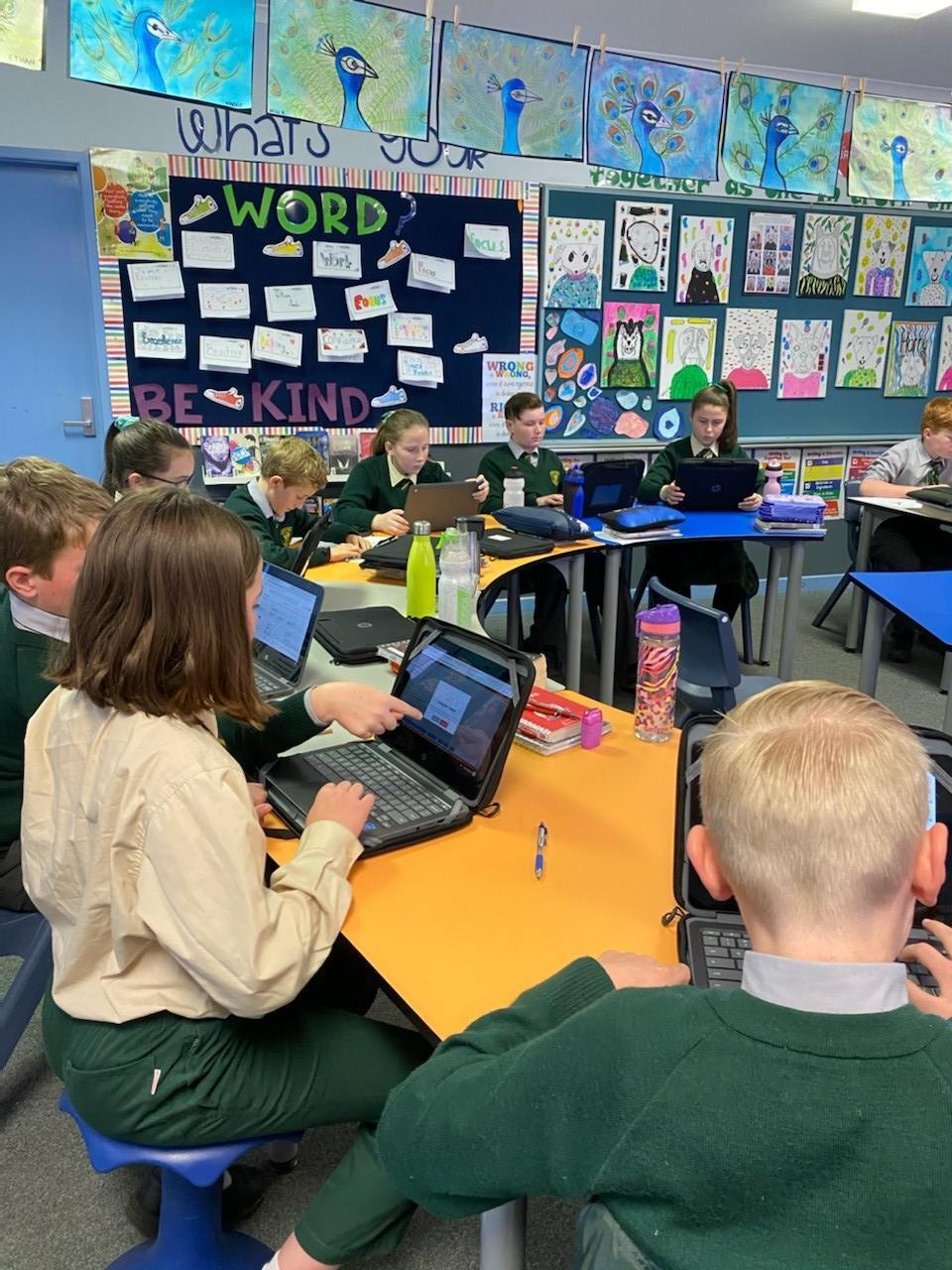 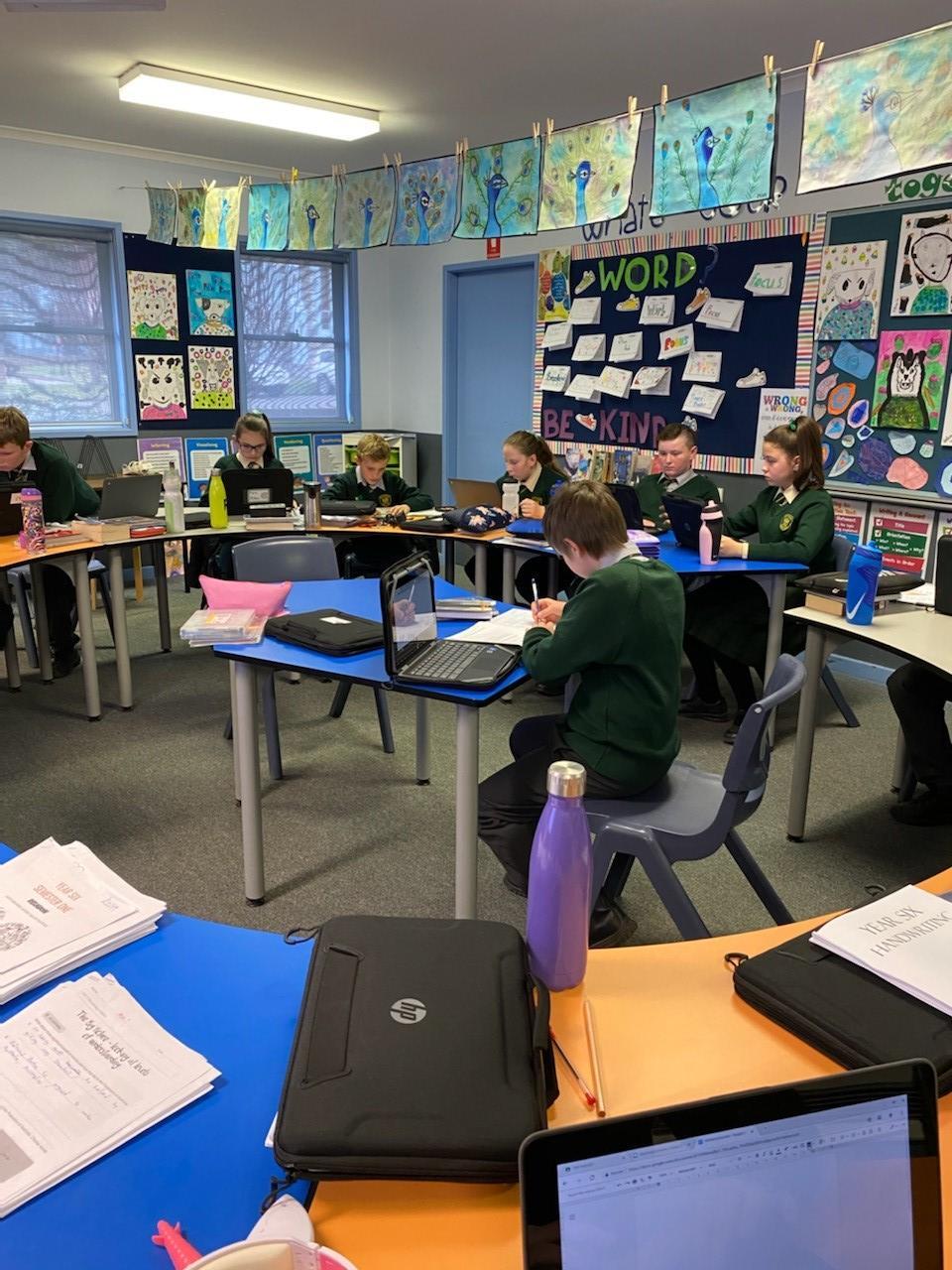 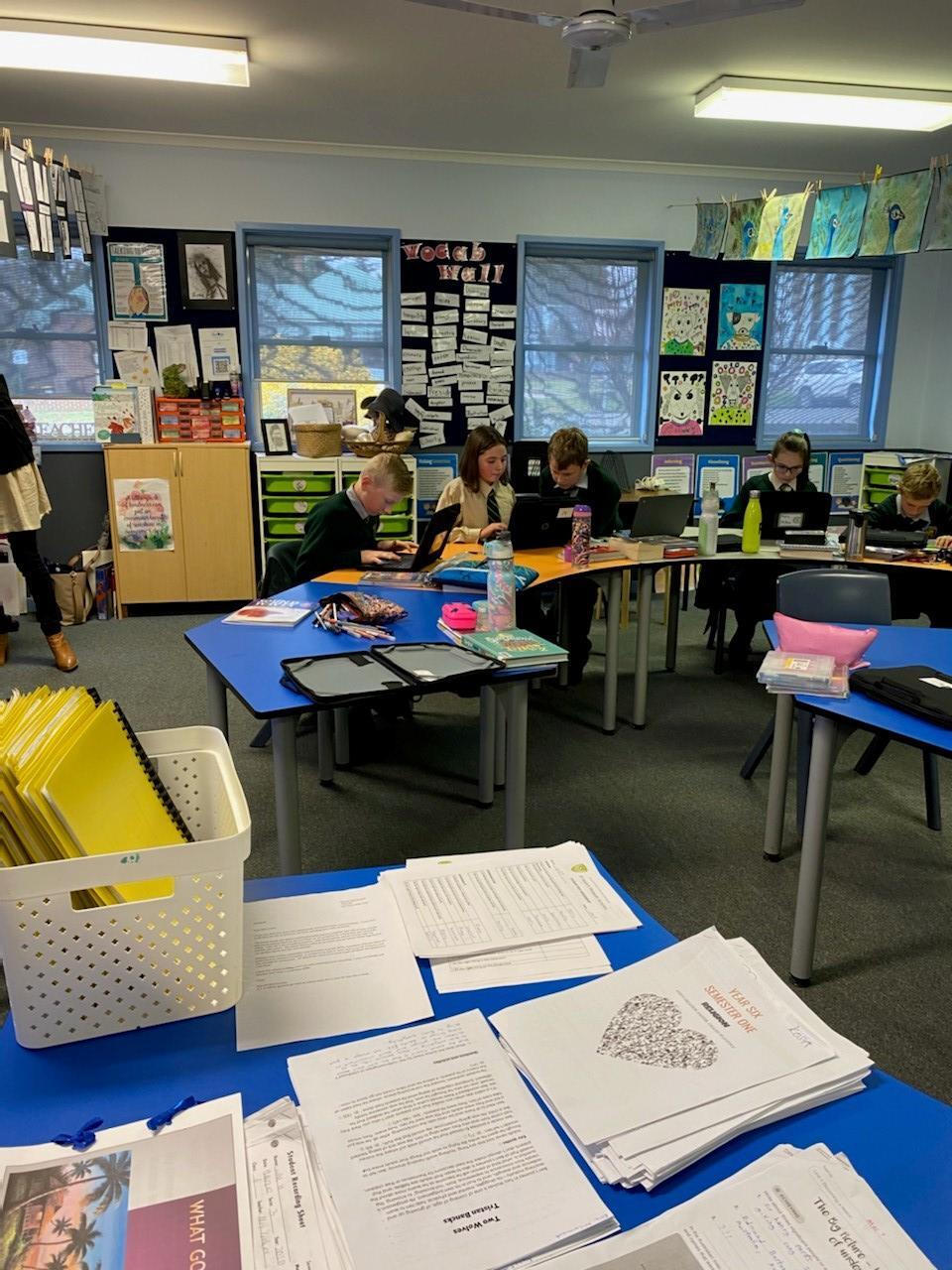 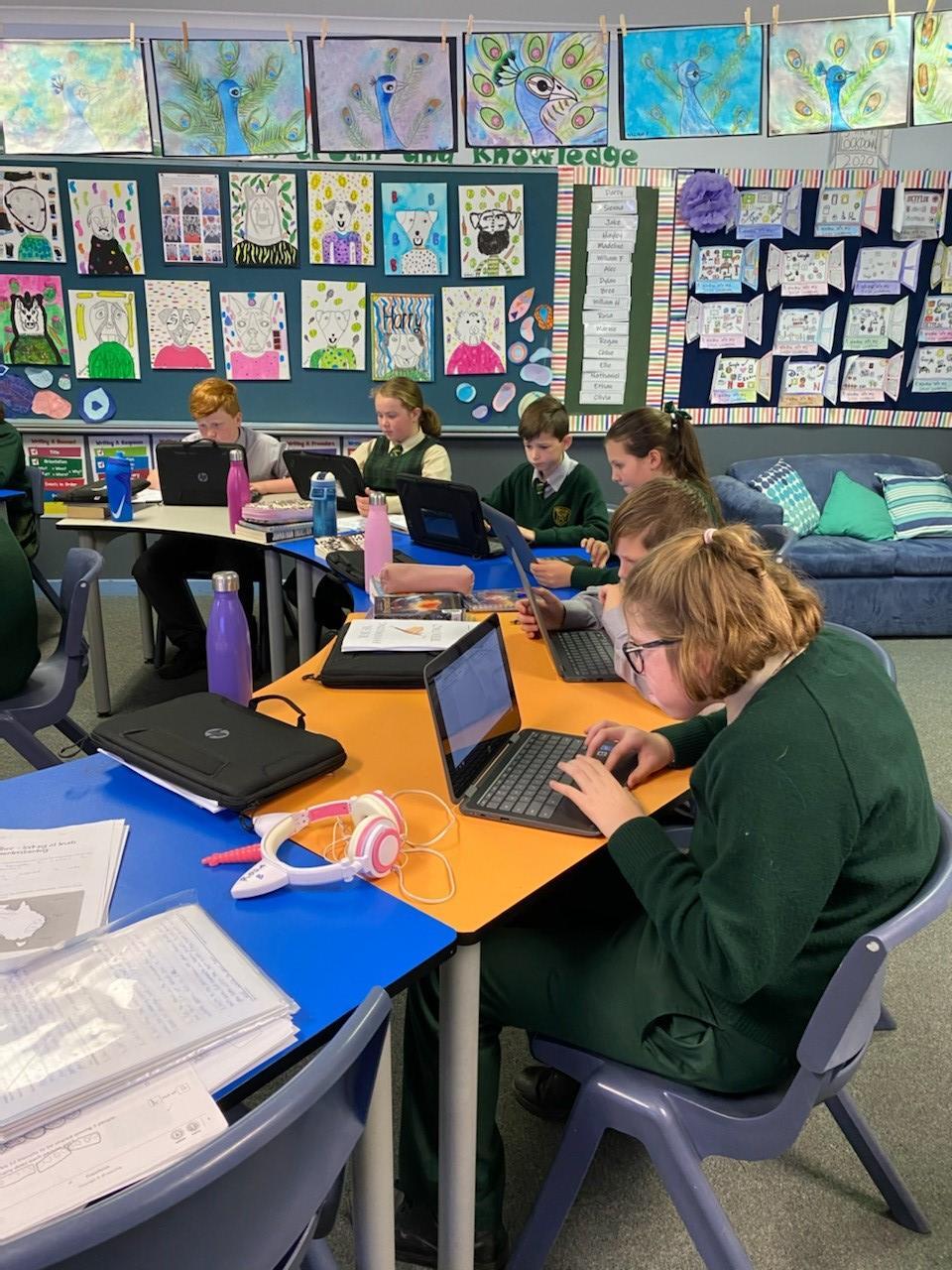 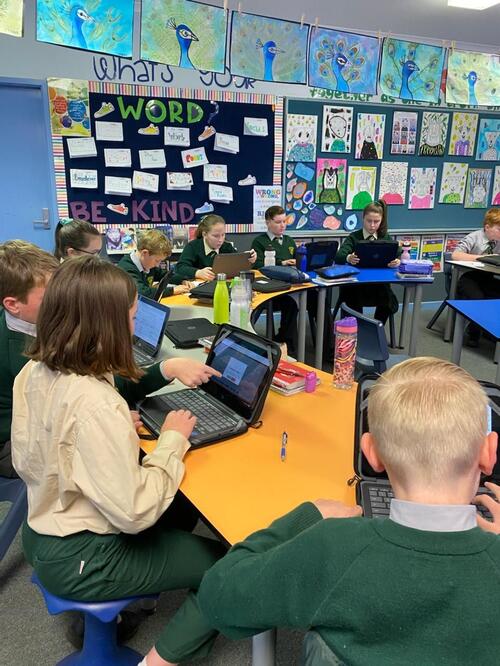 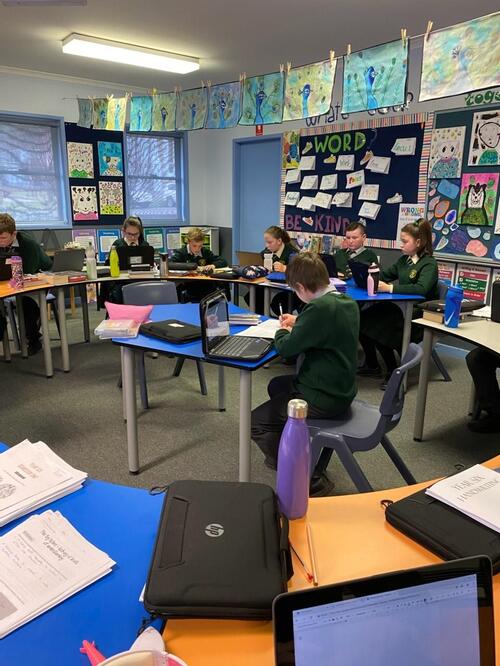 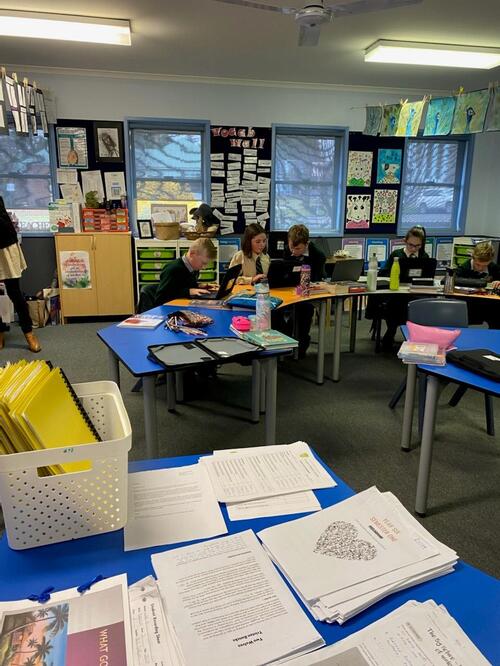 In response to the changed learning circumstances in Term 1 and Term 2, Semester 1 2020 reporting processes across our Archdiocese have been modified to provide parents with specific information about their child’s achievement and progress. Changes to reporting have occurred in every NSW education sector due to the COVID-19 pandemic.

Over the past two weeks, there has been an increasing amount of children catching colds. I have received many calls from parents asking if they should keep their child at home as they are feeling quite well and only have one or two symptoms. Our current advice is that children and staff must stay home if they are experiencing any cold or flu symptoms. This advice has come from the NSW Ministry of Health and Catholic Schools NSW. Children with existing conditions (such as allergies) that we are aware of, that present with some similar symptoms are able to attend school.

Students, staff and family members are encouraged to take a COVID-19 test if they are experiencing cold or flu symptoms.

I am thankful for all the calls and even more thankful for your support with keeping your children home. Please be assured, if your child is well enough, we are able to provide some homework for them to complete.

Your continued support with this will ensure that we are doing our very best to keep our community safe.

Our School Counsellor will start on Monday 29 June.

These sessions are a wonderful chance for you or your child/ren to be able to discuss any concerns or worries they have. They can provide strategies to assist with behaviour management, stress, resilience and anxiety.

Emily Spackman, daughter of Nicki and Gerald, is to be awarded a Dean's Scholarship at Melbourne University, offered only to those achieving in the top 3%. Emily has attained a Bachelor of Science Degree with a major in Psychology and is currently doing Honours with a project on anxiety with people with autism. Emily is planning on doing her Masters Degree in Clinical Neuroscience next year.

Congratulations Emily on your hard work and success.

Emily completed her primary education at St Mary's in 2009 and went on to attend Trinity Catholic College.

It is always wonderful to hear about our ex-student's achievements!

Our thoughts and prayers are with the family of Glenn Greenwood after his recent passing.

Glenn and his children attended St Mary’s and his nephews Dylan and Saxon are current students. His daughter Kelsie is currently doing her teaching placement in Year 4 with us.

Students in Years 4, 5 and 6 will stand with staff out of the front of the school to form a Guard of Honour at the conclusion of Glenn's funeral, which is being held tomorrow at 11am. Children participating in this are asked to bring their school tracksuit to put over their costume for this short period of time.

Lost Property and Naming of Clothes

Please ensure that all pieces of clothing, lunch boxes, drink bottles and other items sent to school are well named so we can return pieces to their owners quickly.

Please spread the word about our School Tours. If you know someone who is interested in learning more about St Mary's or who has a child ready to start Kindergarten in 2021, we welcome their visit. Social distancing regulations will be put in place for our tours.

Enrolments can now be placed online. Go to https://enrolments.stmarysc.nsw.edu.au/enrol/ to enrol now.

Enrolments packs are available from our School Office or can be downloaded from our website http://www.stmarysc.nsw.edu.au/enrolment.html Next term our preschool friends will be visiting each Friday afternoon to participate in The School Explorers, our school readiness program.

Attached below is the amended program dates, please share this around!

Your gold coin donations for our Superhero Fundraiser day tomorrow will help raise desperately needed funds for Vinnie’s COVID-19 Crisis Appeal. Donations can also be made online at www.vinnies.org.au/covid19crisisappeal or by calling 13 18 12.

Please remember to support our St Mary’s Mini Vinnies team in their efforts to keep the poor and homeless warm this winter with donations of the following:

(please make sure any used items are in reasonable condition)

Donations may be delivered to St Mary’s Primary School office. 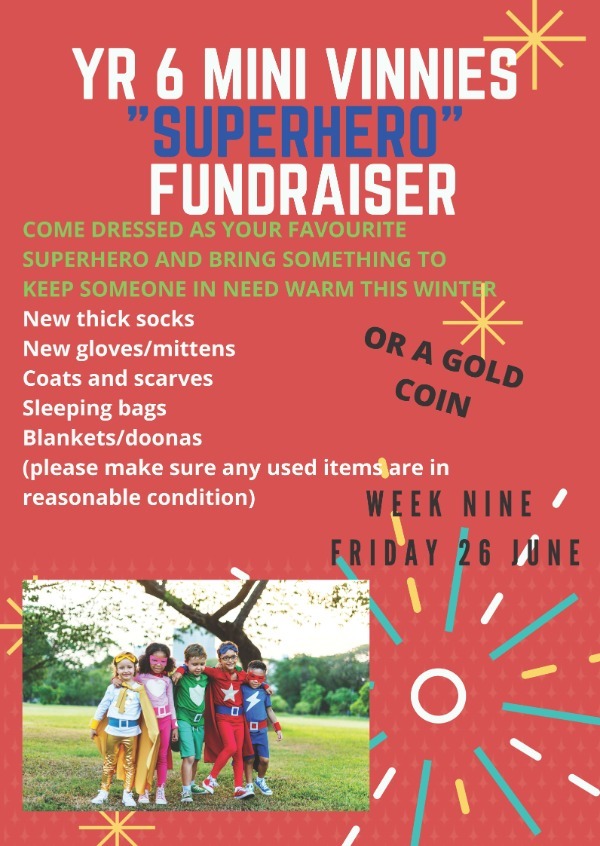 As a Staff we know how important it is to take time to look after our personal well-being as teachers and parents. At our last Staff Meeting we looked at The Resilience Project. This is a program devised by Hugh Van Cuylenberg in response to mental illness and hardships within his family as he was growing up.

I have also included the link to his website for those who may be interested in following up. https://theresilienceproject.com.au/

One in four young Australians now suffers from a mental health issue, according to Beyond Blue, which many experts believe constitutes a crisis.

And it appears the situation is only getting worse.

Parents are becoming increasingly desperate for answers and one man who thinks he knows exactly what’s going on is Hugh van Cuylenburg, founder of The Resilience Project.

Van Cuylenburg says it was in 2008 when he spent some time living and volunteering in the far north of India that he feels he hit on what is going wrong with Australian youth, and most importantly, how they can be helped.

“In this desert community, there was no running water, no electricity and no beds; everyone slept on the floor of their desert hut,” he says on The Resilience Project website.

“Despite the fact these people had very little to call their own, I was continually blown away by how happy they were,” he continues.

“It was this experience, and subsequent post graduate studies, that have led me to some pretty simple conclusions about the things that we need to do here in Australia if we want to be happier,” he says.

He says those things are “practising gratitude, empathy (compassion) and mindfulness.”

Van Cuylenburg told Gardner that it’s anxiety that is the most common mental illness for Australian youth, followed by depression.

“And it ravaged her,” he says, adding that mental illnesses such as anxiety, depression and eating disorders not only affect the sufferer, but their families as well.”

Van Cuylenburg says he feels devices and social media have a lot to answer for when it comes to mental illness.

He feels this results in connections between young people that “are not as real.”

“I don’t know about you,” he tells to Gardner, “but I am so grateful I grew up before devices and social media and all those things.”

Van Cuylenburg says it’s reached a point where Australian youth are “addicted” to their devices and that addiction is as real as any other when it comes to the detrimental effects and difficulty in treating it.

If there’s one thing van Cuylenburg wants parents, children and all Australians to do is to “get off your phone.”

“When you’re with your kids, leave your phone in the car, leave it at home, be there with your kids, because they learn off you every second of the day,” he says, adding that when children look to their parents for their responses and reactions to them, parents are quite often looking at their phones.

“It is the greatest gift you can give them.”

At the Gonski Institute for Education we are committed to helping every child reach their full potential, educationally and in life. We also recognise that parents and caregivers play a crucial role in a child's learning and development journey.

We have developed a set of parent guides to support parents through a range of issues related to their child’s education.

These resources, developed by Dr Amy Graham (Gonski Institute for Education Research Fellow), are designed to provide quality, up-to-date information for parents and carers. The guides combine translated research with practical tips for parents and carers to use with their own child. Topics range from digital device use, to social and emotional skills, play and transitioning to high school, among others.

Please use the below link to access the information:

Students who have dyslexia often have an inquiring mind and are very intelligent. They can problem solve, comprehend new ideas and are creative, analytical thinkers. Last year all of our teaching staff participated in an online dyslexia course. This benefits many children, not just those with Dyslexia. 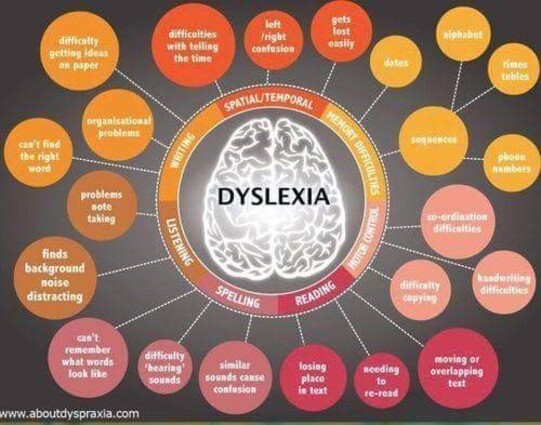 This term, Year 5 have been learning about the solar system. We were given a project to complete at home. We had to include all the planets and paint them and include what we learned and what materials we used. It had to be a 3D model to scale and include our very own moon. Some projects even had space facts. When you presented it to the class you had to answer a few questions like, “How long did it take you to make it?” and “Where did you get your idea from?” They were all very good and different. Now we are waiting to see who has won the prize. 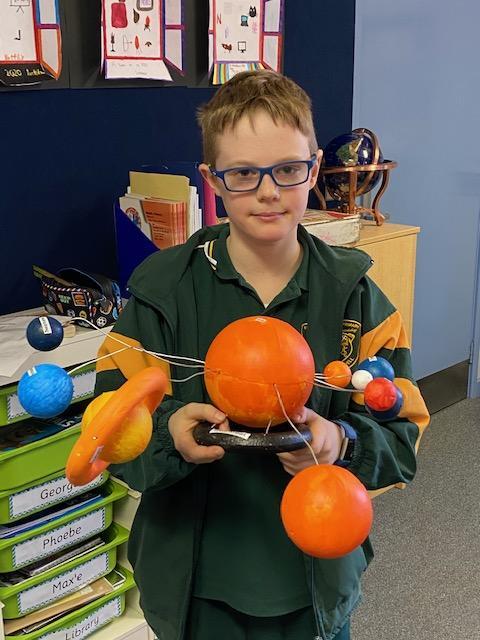 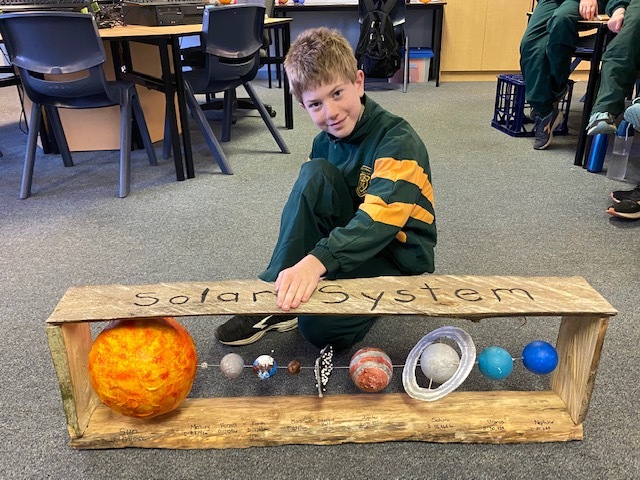 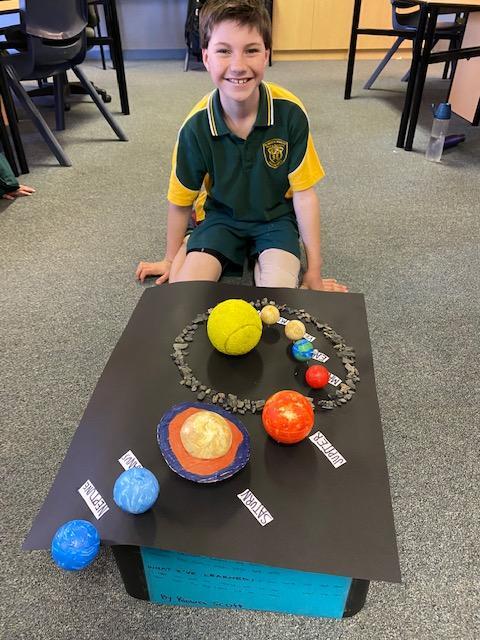 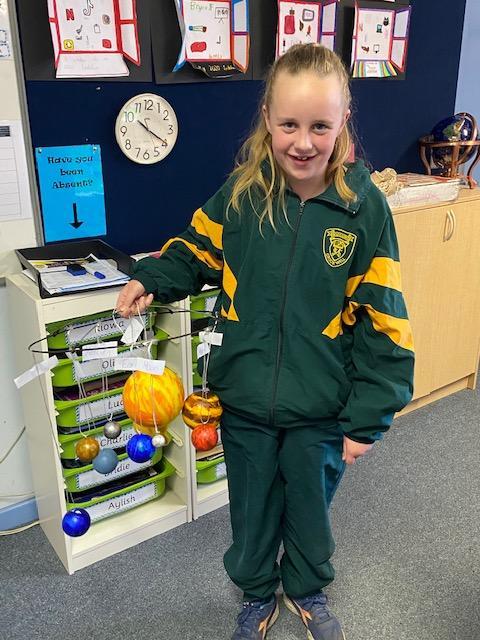 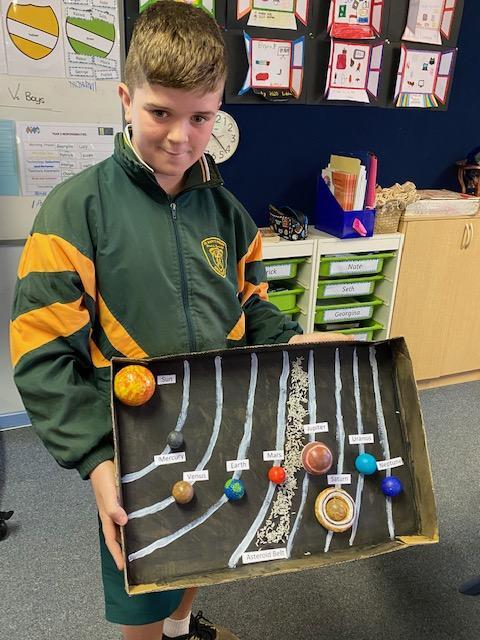 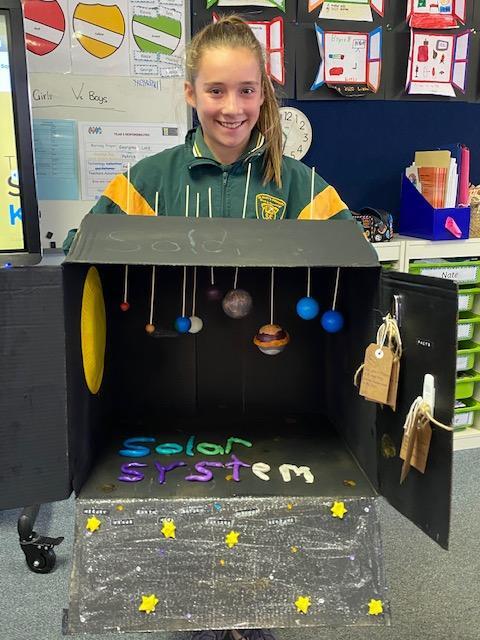 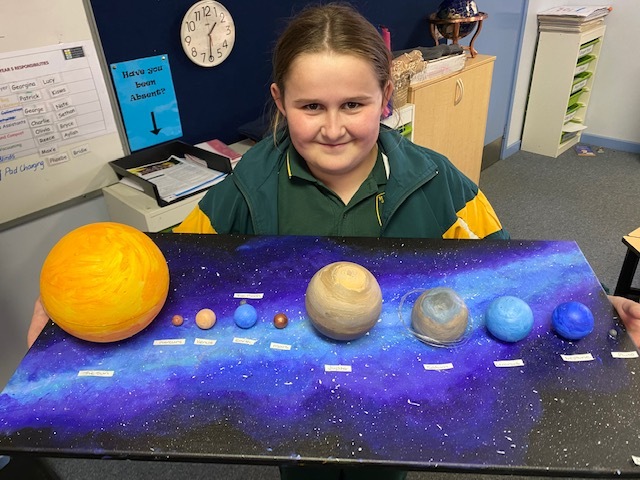 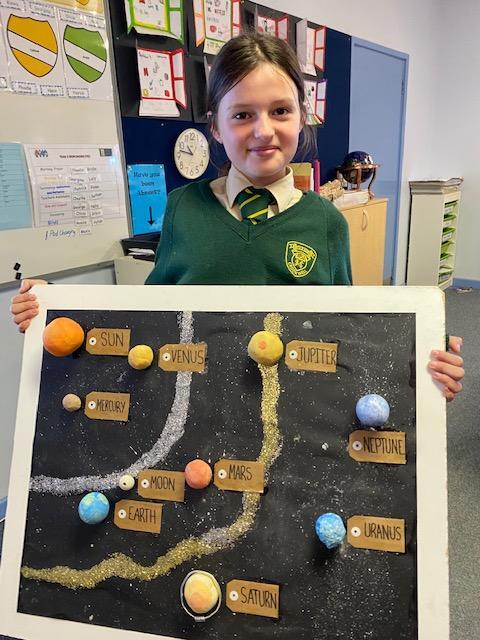 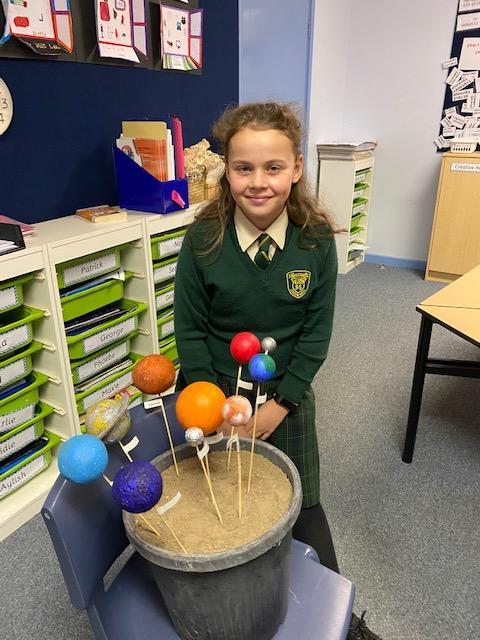 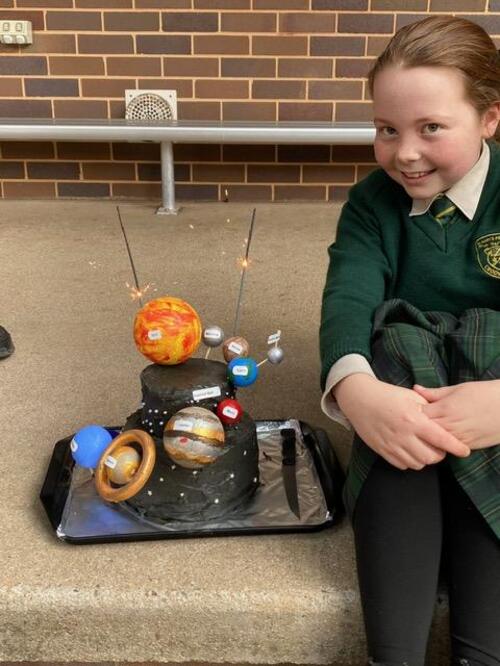 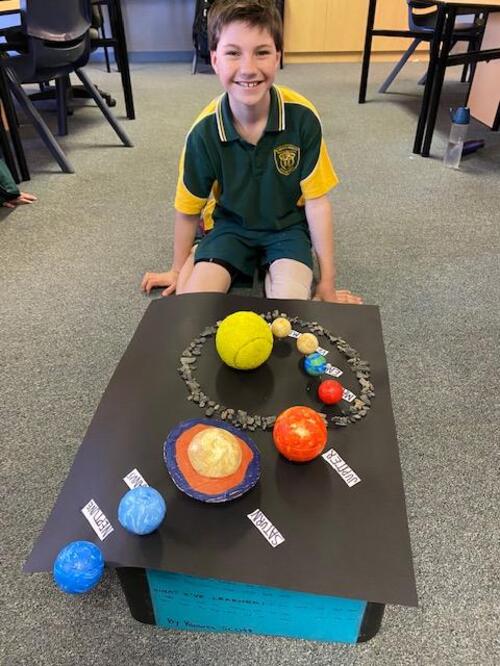 Term 2 school fees are now overdue unless you have an existing direct debit in place.

Reminder statements have been sent out.

If you would like to discuss your fees or arrangements, please do not hesitate to contact Belinda.

A reminder that all uniform must be paid for before or at time of collection from the School Uniform Shop.

Items will no longer be able to be taken home for trying on for size unless paid for first. There are spaces available in the Office that can be used for trying on. Alternatively items can be exchanged if tags have not been taken off after purchase.

Thank you for your understanding.

If you have any old shopping bags you no longer want, can you please give them to the Office for sending uniform items home with students. Thank you.

The Uniform List and Order form is now available on the school website in the Parent Page.

Items preferably should be ordered via Qkr and will be distributed on Tuesdays and Thursdays.

Tuckshop will be available on Friday's first break only with limited menu items, no window service and no cash orders.

Please be advised that due to availability of stock, some items you have been able to order in the past few weeks, may temporarily now not be available.  Thank you for your understanding of this.

The local Archdiocese has organised a series interactive live-streamed presentations for Marriage & Family Month immediately after the 11am Online Mass at St Christopher’s Cathedral. This coming Sunday is the last one (28th June).

Listeners will be able to interact online and ask questions of our impressive line-up of international, interstate and local Catholic couples speaking at 11.45am each Sunday from mid-June. See full program at https://www.catholicvoice.org.au/marriage-family-month-june-2020/ 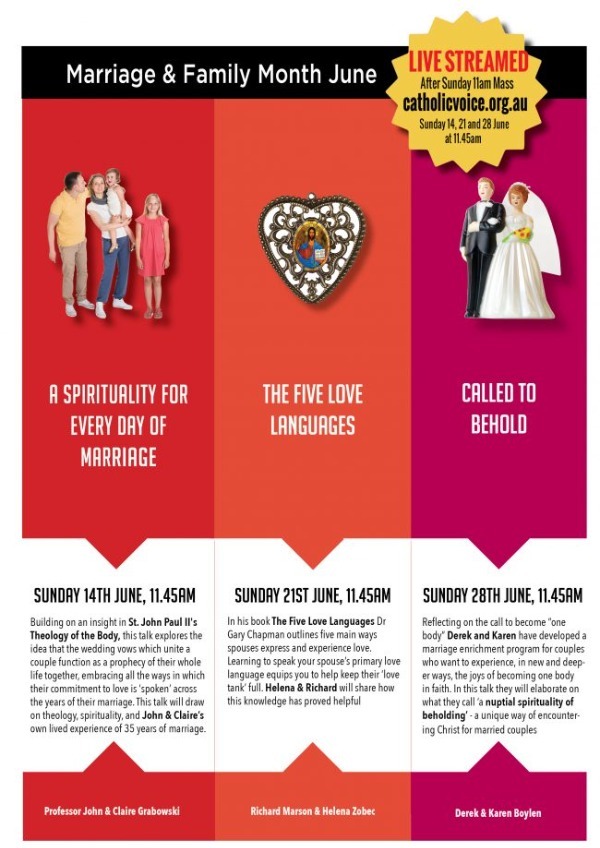 Mass times have been revised – please read the attachment for updates.

June Masses are continuing, with the restrictions being adhered to of a limit of 50 people and names and contact details being recorded on entry.

No small Country Masses in June.

July restrictions at the moment are: 1 person per sq metre. Each Church has been measured and will have a capped number allowed.

For Parish and Sacramental matters please forward your enquiries to Parish Secretary, Janet Haynes or Pastoral Associate Sr Rosemary via email or call into the Parish Office at the Old Convent Building on Tuesdays or Thursdays.

Tomorrow is your last chance to buy the Crookwell 200 Years celebration calendar. You can purchase at the school office for $10, cash only please. 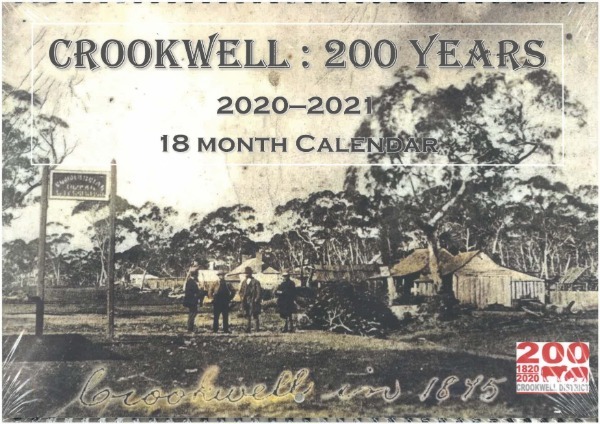